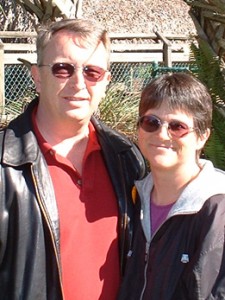 Mark spent his teenage years growing up on the east coast, in the Hampton’s of Long Island.  After graduating High School Mark worked for a company that quickly promoted him and moved him to Indianapolis as a warehouse manager.  By age 21, Mark  had the responsibility of keeping an inventory that turned 6 to 10 times/year in stock, a fleet of 40+ vehicles moving, and 100+ employees working daily.

While working here he eventually met Becky, his future wife.  Soon after, he left his position as warehouse manager and moved to Denver (where Becky lived) and he became a purchasing agent for one of the countries largest cable TV construction companies. In this position he managed spending that could exceed $800,000 to $1,000,000 on a single Purchase Order.

After Mark & Becky married, they then moved back to Long Island, where Mark returned to school at Grumman Data Systems Institute to learn his computer programming skills. He graduated at the top of the class.  His first position after graduation was with St. Josephs College in Patchogue & Brooklyn NY. This eventually led him to a position that moved his family to Iowa in 1986. His computer career expanded from there, spanning over 30 years and dozens of industries.

In 1989 he founded his own company MHC Consulting, based in West Des Moines Iowa, later to be renamed MBMA Corporation, which was successful for over 30 years in the computer consulting industry.  Some of the industries he excelled in included banking, manufacturing, distribution, retail, wholesale, trucking & freight management, and customer support. This would later be significant when MBMA Corporation switched from being a consulting firm to becoming the manufacturer and distributor of Original Udder Balm and other skin care products.

Mark continues to live in West Des Moines where he works to run and grow MBMA Corporation.

Becky spent most of her young adult years growing up in the midwest calling Minneapolis and Fergus Falls, MN home.  After high school she moved to Denver.  In Denver she ran the purchasing department of one of the largest cable TV companies in the USA. She was directly responsible for all purchasing agents and oversaw millions of dollars of purchases.

Shortly after Mark & Becky married, they moved to Long Island where many of Marks roots were.  After 3 years on the island they decided to raise their family in the mid-west lifestyle,  and moved to Iowa.

Becky spent many years as executive assistant to the Presidents of several companies, learning the ins and outs of several industries. In 2005 she returned to college, adding a business degree to her many years of actual business experience. She has brought both real world experience and her degree to work as Vice President and co-owner of MBMA Corporation for over 15 years.

error: All text and images on this site are owned and copyright protected by MBMA Corporation.